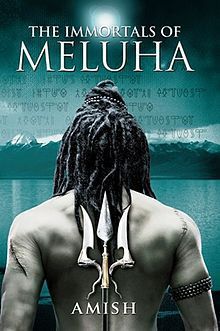 The Immortals of Meluha

Disclaimer: This is not exactly a book review, meaning I’m not talking about the author or his story plots literally.

This is just top 13 spots where the book created an impact while reading and the random thoughts that ran in my head that times.

A foreigner from a strange land, offers citizenship and thereby security and improved quality of life to the tribe of Shiva called Gunas. Here at Kailash, Shiva is the chief but still lives in constant flight or fight mode because of the Pakratis. But in this new land he will just be another citizen.

And there comes a tough choice; Power and survival mode or no power and peace mode.

Come to our land. It lies beyond the great mountains. Others call it Meluha. I call it Heaven.

Shiva in Kailash, and now Nandi? It’s already fascinating to feature Gods and deities in the story. Now, Nandi praying to Lord Ram; is that a good-old prophecy that I smell? Perfect for my fantasy craving soul! 😊

People have been waiting for him for centuries. Centuries?!! In that truck-loads of time, they could have done something about whatever they’ve wanted to be done. The power of prophecy, right?😄 Makes people kind of lazy with ‘someone else will do my job’ mentality.

What can I do that any amongst you smart people can’t?!

Being almost immortal and a vikarma for almost a century is the worst combo possible. Glad, that Shiva asked all the right questions about it.

At the centre of the procession, unseen by Shiva, with her head bowed low, draped in a blue angvastram that covered her from head to toe, her face a picture of resigned dignity, trudged the forlorn figure of Sati.

Shiva is not Thanos here, for he can snap his fingers and blink the ‘enemies’ out of existence! Expecting just a good-old human to do super-human activities is mad indeed. 😵

They want me to destroy the entire way of life of eighty million people all by myself! Are they mad?

How are people okay with even if the laws are unjust? Strange laws practiced for centuries would do that, huh? 😑

He still loves a country that treats him so unfairly. Why? Even worse he doesn’t even appear to think he’s being treated unfairly.

#7 Perks of being a Messiah

‘All the same,’ said Shiva. ‘That law must be changed.’

How convenient it is, that everyone is ready to dance on tip-toes just for your word, huh? Bad law? Not a problem. I’ll just sign it off as null and void. 😎

Shiva declared the vikarma law as null and void. When ex-vikarmas join the army for battle, they are named as vikarma brigade? Hmmm, that name, it’s either a super badass name or super stupid name. I can’t decide. 🤷‍♀️

‘We will call it the Vikarma Brigade.’

All of us are Mahadevs!

‘Yes, I intend to give you the benefit of our way of life.’

Princess Anandmayi spills the beans that they too believe in the same neelkanth prophecy, that a foreign savior would deliver them from evil. Both Suryavanshis and Chandravanshis therefore believe that they are good and the savior will be on their side. Shiva being on the side of Suryavanshis, defeats Chandravanshis. But after the battle and bloodshed Shiva realizes that Chandravanshis are not the supposed ‘evil’ to be destroyed by him. In fact, he realizes it’s a blunder of cosmic proportions! The look that must have been on Shiva’s face!🤯

An agonized whisper suffused the tent with its resonant grief. ‘What have I done?’

So true and so sad that the cost of that revelation is so many lives in that battle.

His burden didn’t feel any lighter. But he felt strong enough to carry it.

“I can’t carry your burden. But I can carry you!” Am I quoting Sam and Frodo from LOTR? Yes, Iam. No idea why my brain brought up that scene though. 😄Anyways, this line was heart-warming and a great ending to the book one.